These special awards are presented to people who go above and beyond the level most of us could dream to achieve in raising charitable funds for the Toy Trust and who complete great personal challenges. The recipients of this award so far are;

Gary Grant was presented with a Toy Trust Outstanding Contribution Award at the Toy Trust Big Challenge 2022 in recognition of his incredible personal commitment, generosity and dedication to the charity over more than 20 years. 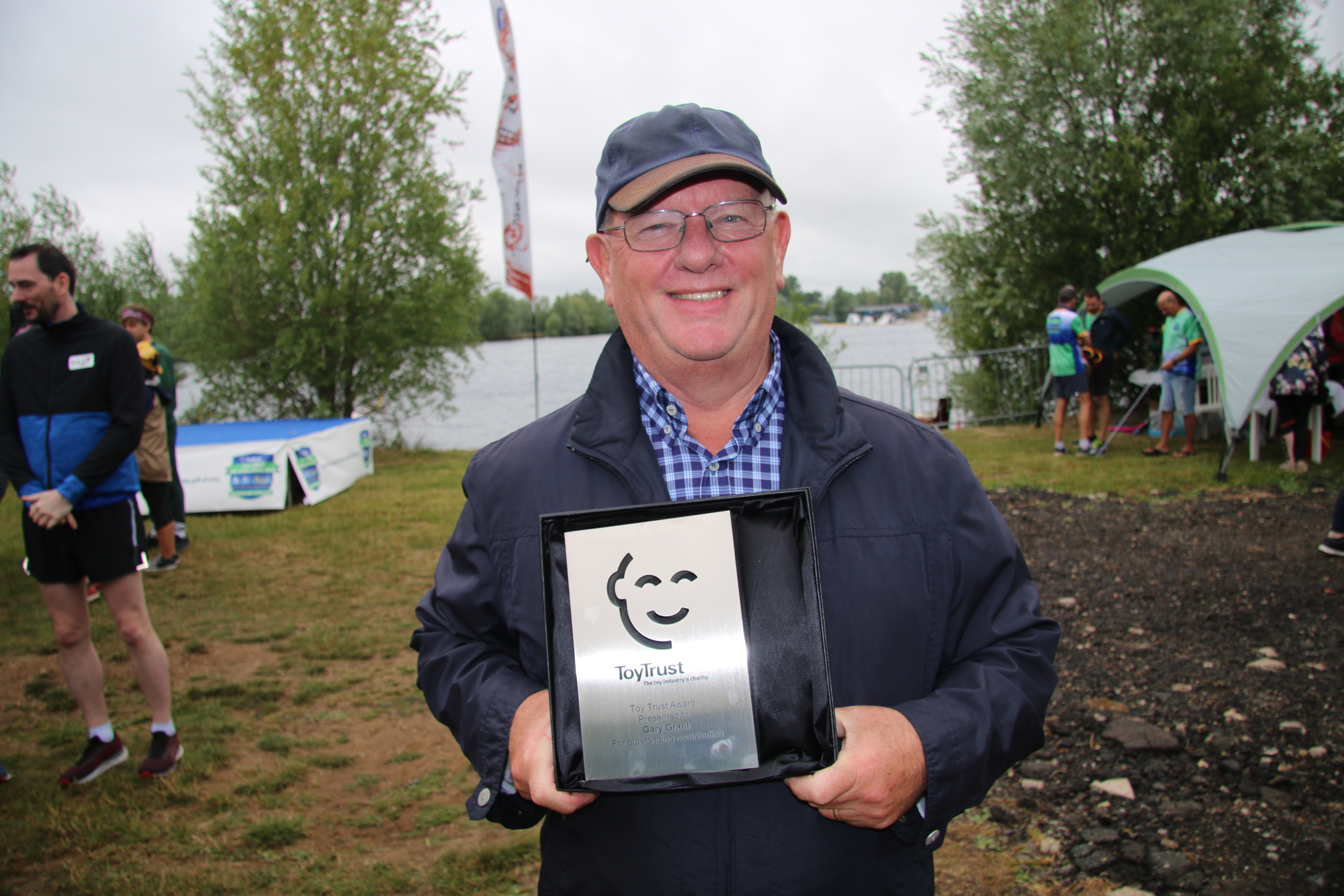 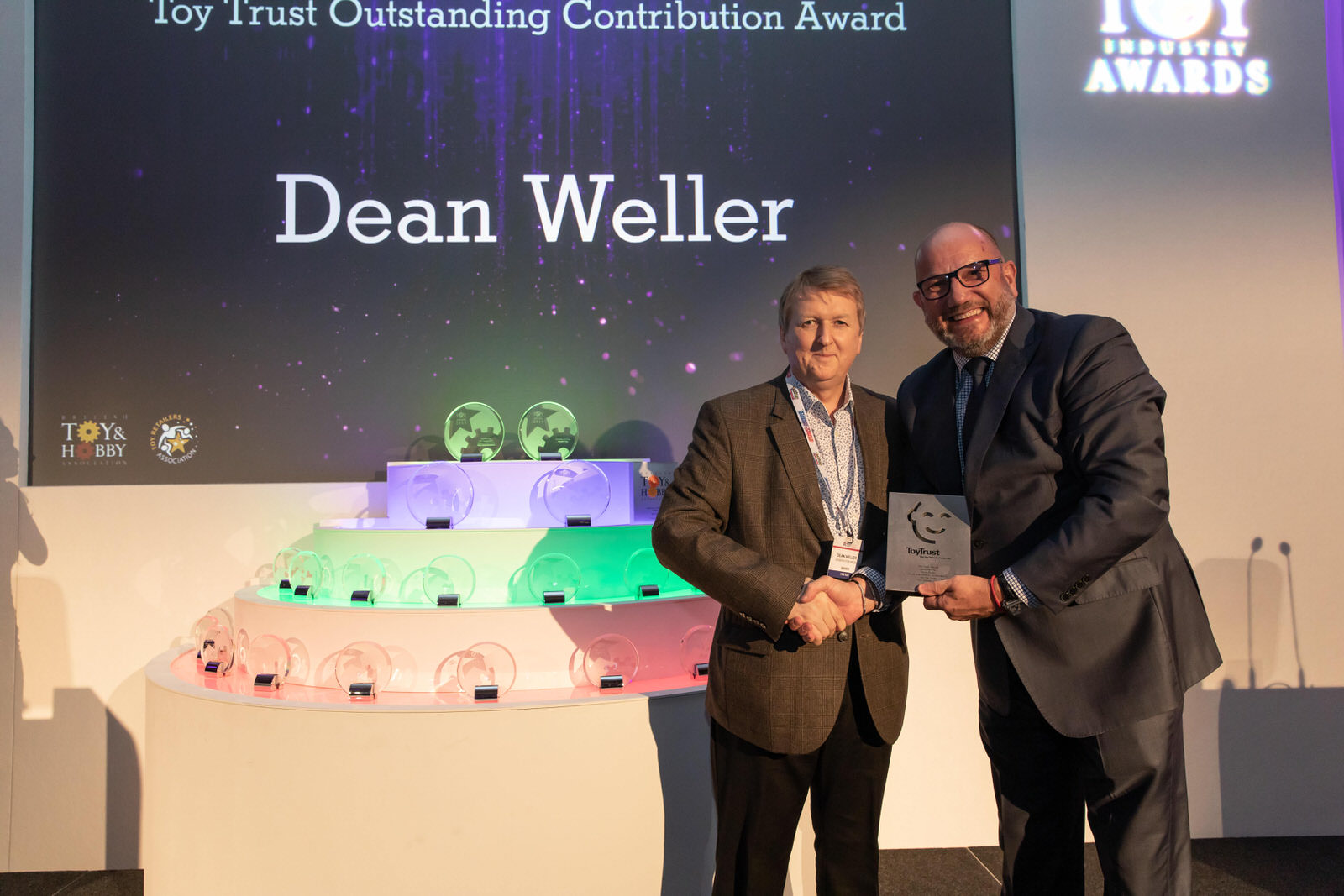 Dean Weller, Founder and CEO of Generation Media was presented with a Toy Trust Outstanding Contribution Award in January 2020 for his long-standing support of the Toy Trust and his contribution in raising many thousands of pounds for the charity over two decades. He has been instrumental in developing the way his company take part in and host events – often donating all proceeds directly to the Toy Trust as well as inspiring his team to get involved personally.

Alan Munn was presented with a Toy Trust Outstanding Contribution Award at the Industry Day 2019 in recognition of his incredible personal service to the charity. 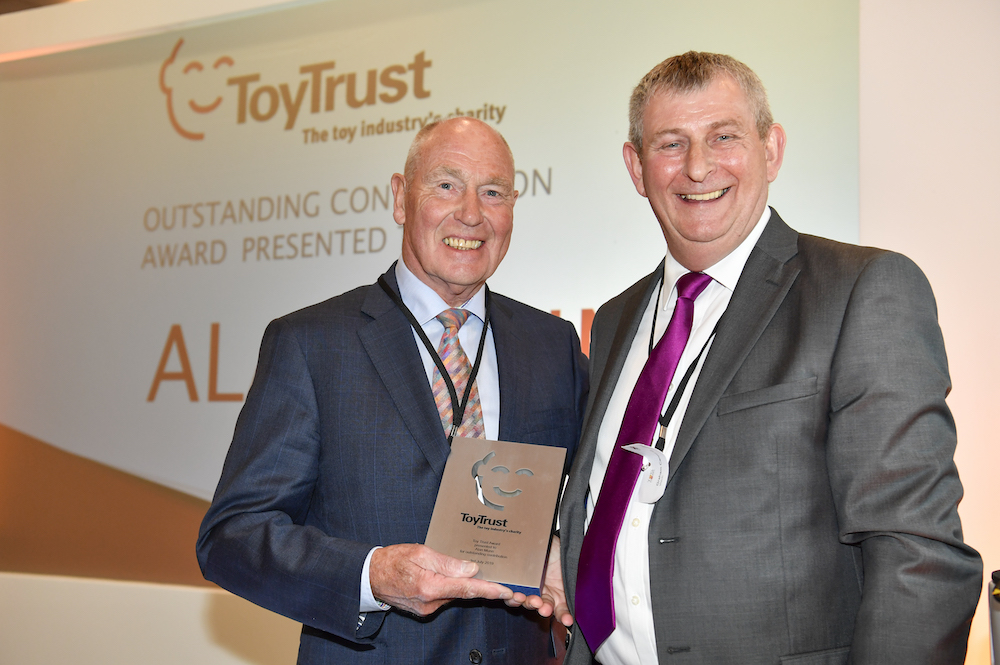 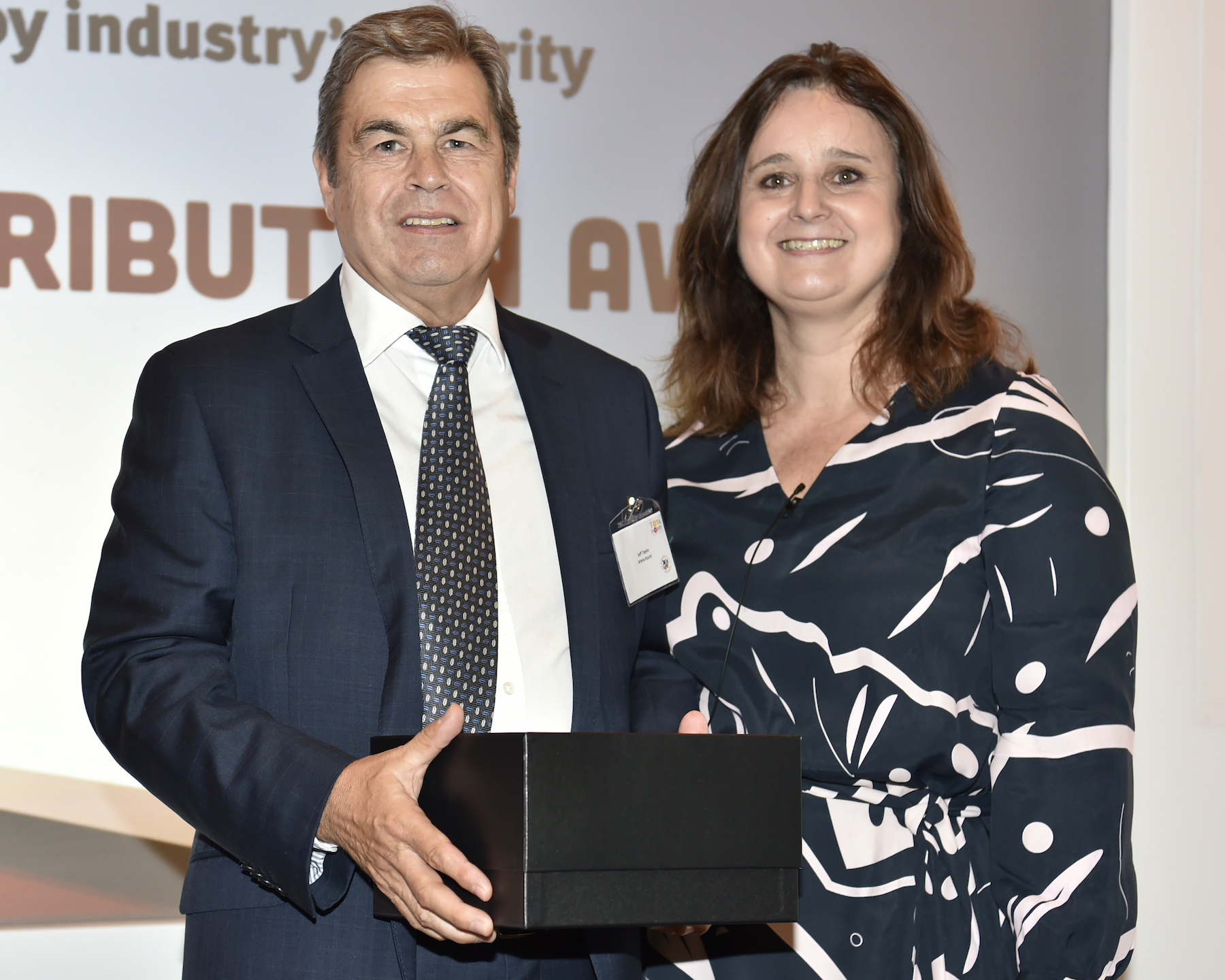 Arena Azure’s Jeff Taylor was awarded the BTHA’s Toy Trust Outstanding Contribution accolade, for all his efforts in mediating the annual media auction and fundraising efforts, at the BTHA & TRA Industry Day. Through his involvement over the past nine years, £407,000 has been raised through the industry via the media airtime Jeff has sourced. Foye Pascoe, Chair of the Toy Trust, said: “Jeff has been a fantastic support to the Toy Trust over many years. His has been a contribution that the Charity Committee has always valued but has not been as well known by the wider industry at large until today. Jeff has been instrumental in generating and sourcing free air time from many media companies for the annual Toy Trust media auction that generates significant funds each year for disadvantaged children. The media companies themselves have been hugely generous and the toy companies participating have been tremendous. Without Jeff’s pivotal role, however, in connecting these key partners, this vital venture would simply not have happened. Jeff has truly made an outstanding contribution to the Toy Trust and our thanks go to him today.”

Richard Beecham was presented with a Toy Trust Outstanding Contribution Award at the Industry Day 2016 in recognition of his incredible personal generosity to the charity. Richard made donations totalling £125,000 to the Toy Trust which has enabled the charity to continue its work of provision for disadvantaged and disabled children in the UK and overseas.

A large proportion of Richard’s donation enabled the Toy Trust to extend its support for registered UK children’s hospices in 2016 – Giving the Gift of Play. Specialist play equipment was purchased for the hospices as part of the scheme, which provided crucial play experiences for children with life limiting illnesses, as well as their siblings. 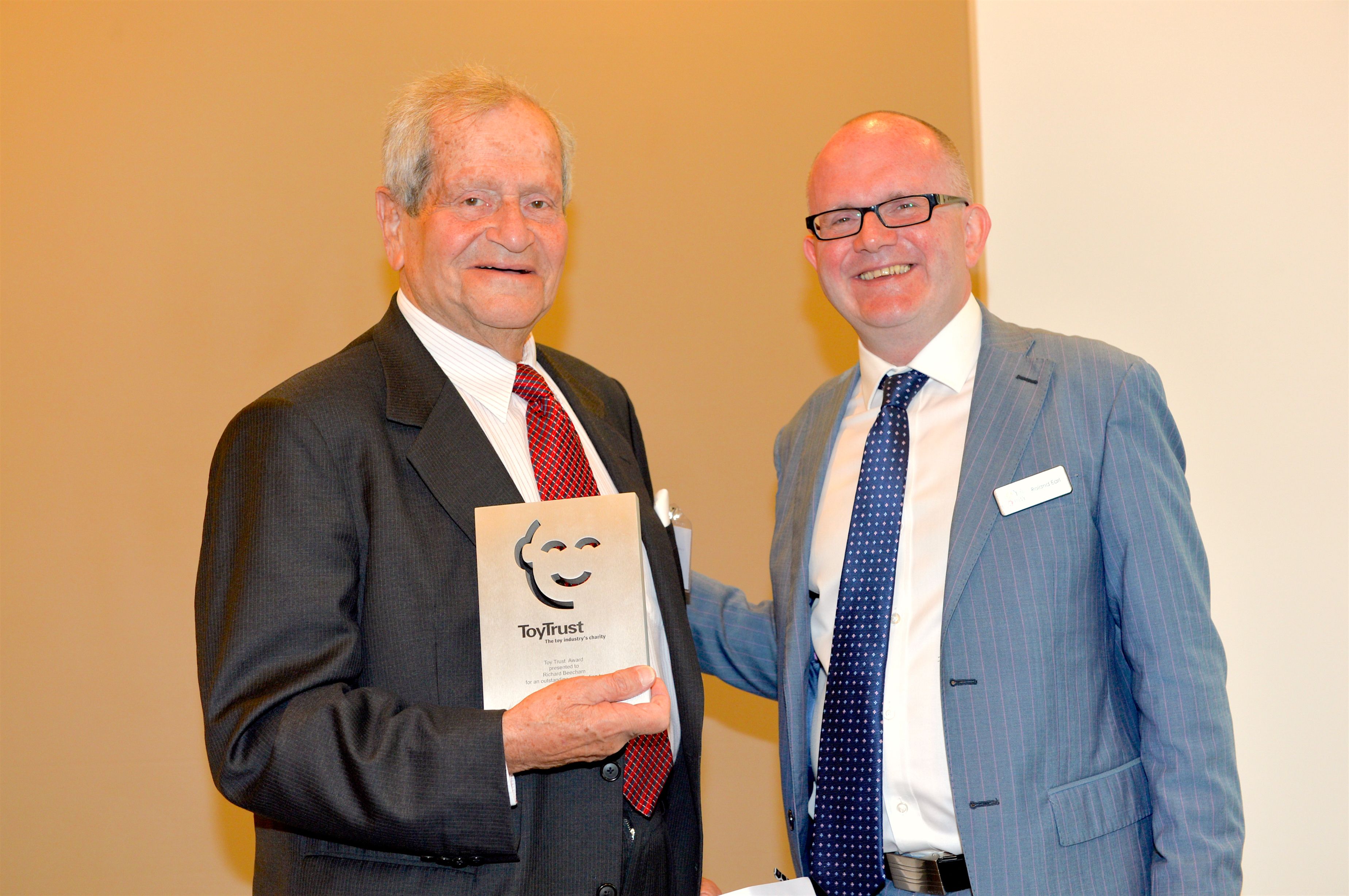 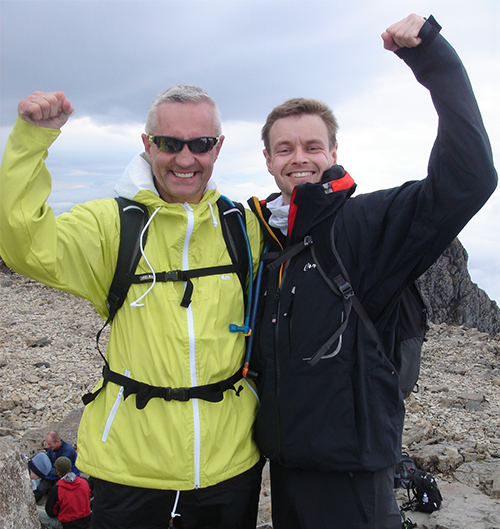 Nick was recognised as a spearhead of the work of the industry charity over the life of the Toy Trust.

He was a respected member of the Toy Trust Charity Committee for 22 years, indeed since the committee’s foundation and was also its chairman from 2010 until 2012. Under his stewardship of the key fundraising events in 2011 and 2012, record-breaking funds were raised of more than £535,000. In 2013 and ’14 he led, personally, on behalf of the committee the organisation of the two key summer fundraising events for the Toy Trust. He was involved in every aspect of the Toy Trust until he retired.

Robert was recognised by the industry for his outstanding contribution to the Toy Trust for his dedication and hard work that enabled him to raise £16,000 for the Toy Trust through the following activities: the 2011 London Marathon, the Corby Brass Monkey, the Kilo Marathon and the Olympic distance London Triathlon. 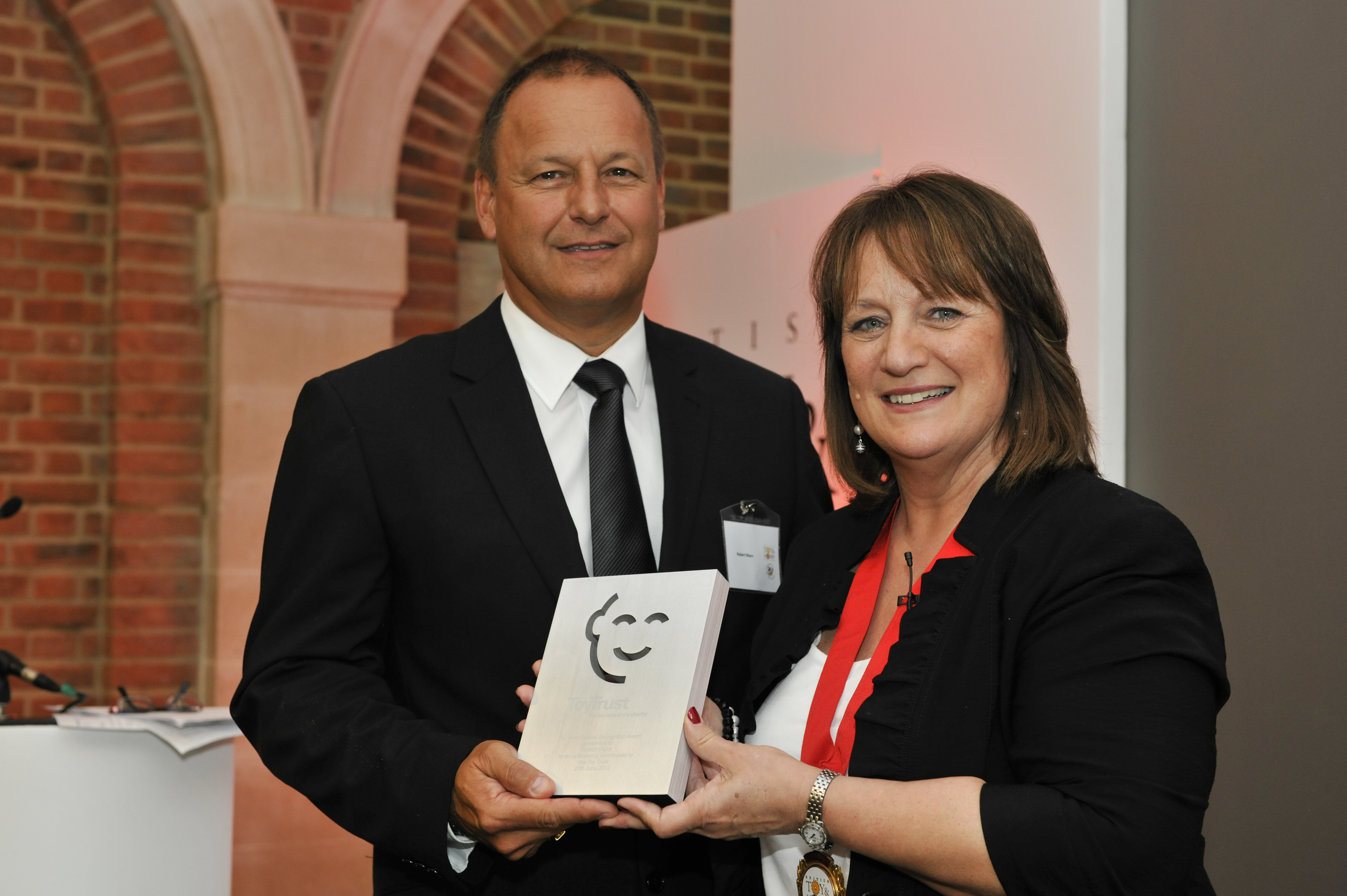 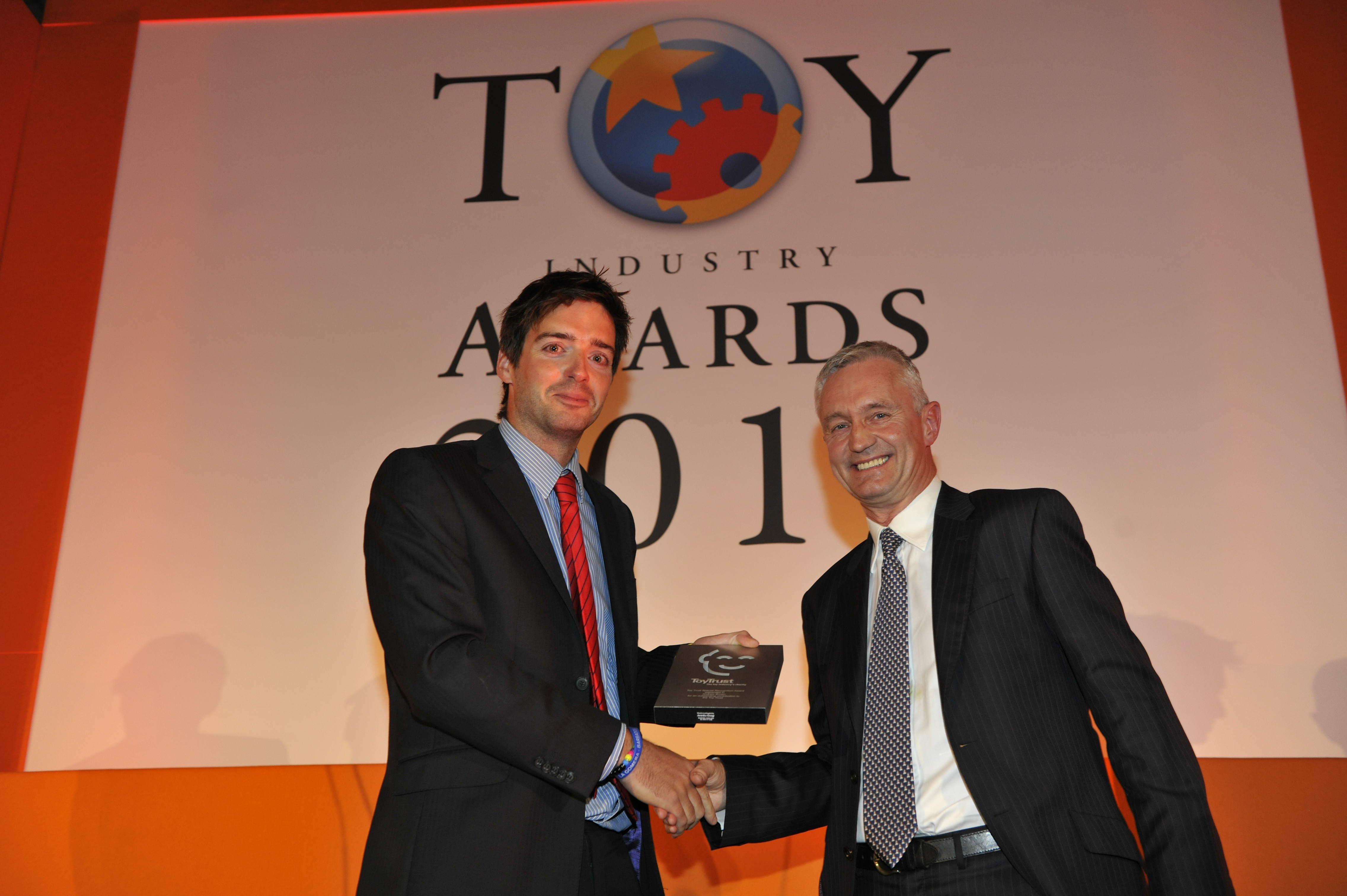 The inaugural award for outstanding contribution to the Toy Trust was presented in January 2012 to Andrew Brown for his Transatlantic Challenge. On December 5th 2011, Andrew Brown set off from the Canary Islands to tackle the epic challenge of rowing 3,000 miles solo across the Atlantic Ocean to raise money for the Toy Trust and Help a Capital Child.

Prior to starting the race Andrew spent many hours training to prepare himself both physically and mentally for the challenge that lay before him. During the race Andrew faced some incredibly testing conditions where he battled stormy winds, rain and heavy seas, not to mention the extreme sleep deprivation of rowing and resting in two hour cycles. Andrew completed the race in a phenomenal 40 days 9 hours and 44 minutes and in the process broke the world record for the fastest solo row across the Atlantic Ocean. He raised more than £117,000 for the Toy Trust.